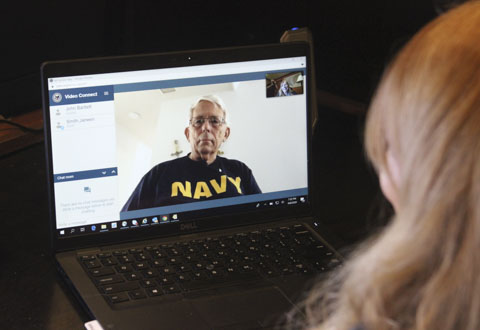 By Patrick Gordon, Digital Media Specialist
Thursday, July 30, 2020
Friday, April 3, U.S. Navy Veteran John Bartlett, 81, was huddled over the toilet in his home, dry heaving and in severe pain. He had recently spent six days in the hospital with a lung infection, which prevented him from taking the asthma medication he desperately needed.

“I would have called my primary care doctor, but it was the weekend,” said Bartlett, a Vietnam-era Veteran who lives in Hawaii. “All the advice was to call 911. After being handled twice by 911 and sent to the hospital, that was the last thing I wanted to do. So, I made a call to the VA hospital here in Hawaii.”

Bartlett’s call was taken by a registered nurse, who listened as he described his symptoms. She said the normal recommendation is to call 911, but there was one other option.

She connected him to Dr. Janeen Smith, an emergency department physician, who works with the VA Sierra Pacific Network (VISN 21) virtual care program. Smith, who works out of San Francisco, was able to talk to Bartlett through VA Video Connect (VVC), diagnose him from more than 2,000 miles away, and get him the help he needed — all without a cumbersome trip to an overcrowded emergency room during a global pandemic.

“[Dr. Smith] took that so quickly, she understood, she read the notes online, and quickly responded,” Bartlett said. “She took the time to break it down and listen to my symptoms. She said, ‘I agree with you; you’re probably in better condition to take care of yourself than to go to a hospital right now.’ That made my day.”

“I couldn’t believe that the VA could respond in an urgent time that beautifully, that carefully and that professionally,” he said. “I could not be more thankful for Janeen Smith and the unknown emergency nurse [who referred him to her]. I consider it to have saved my life. A day or two later, she called back and asked how I’m doing. What a beautiful set of circumstances for the VA to save lives with their VVC system.”

On the same night, another Navy Veteran received assistance in a similar way. Bill Scilacci, 97, served during World War II as an assistant engineering officer aboard the USS Edwards destroyer. He recently fractured two vertebrae and underwent surgery at VA Palo Alto Health Care System. Following the procedure, he received a back brace and moved into an assisted living center at around the same time as shelter-in-place orders were issued.

“He was doing pretty well, and then decided he should spend less time wearing the brace, so he didn’t wear it for a couple days,” said Carol Tanner, Scilacci’s daughter. “He ended up in a lot of pain.”

While he was recovering from surgery, VA staff provided Scilacci with training on VVC and helped him download the application to his phone and iPad. However, due to the extreme pain he was experiencing, he couldn’t focus properly, and needed his daughter’s assistance.

“I knew I could have taken him to the VA if it was the only option, but when I visited the website, I saw that there was a phone number for Vets to contact them 24/7,” she said. “Using that process, we talked to a nurse who took the details, and they passed it on to Dr. Smith.”

Once again, Dr. Smith provided care to the Veteran without requiring a trip to the emergency department. Scilacci received medication to relieve his pain and a new back brace that was more comfortable and less restrictive than his old one.

“It was great,” Tanner said. “Dad was able to get the help he needed. He has used it a couple times since then. If that hadn’t been available, it would have been so much more difficult. It’s incredibly efficient, if you think about the time we would have spent to take him to the ER, and you’re not being exposed to other things. I’m very thankful.”

“It was kind of a window into something new,” said Scilacci. “I was flexible and available, and happy to cooperate in any way.”

For Dr. Smith, this was a continuation of a program she had been working on for more than a year. A needs assessment conducted in the spring of 2019 determined approximately 45% of calls were over-triaged and could have been downgraded or addressed virtually, which would reduce unnecessary visits to emergency departments.

During the COVID-19 pandemic, it became especially important to reduce unnecessary exposure, particularly for older Veterans. This meant proper triaging over the phone could help Veterans like Scilacci and Bartlett receive virtual care and ensure their needs could be met without putting them at risk for exposure.

“During the COVID era, the risks and benefits are different from before,” Smith said. “But even before that, patients would rather be seen at home if it’s possible to take care of them from home. It’s an issue of maximizing our resources efficiently. We’re talking about both convenience and what’s best for veterans with acute problems.”

VISN 21’s virtual care program features nurse practitioners and physicians, all with experience in emergency departments or urgent care centers. It began in San Francisco during regular hospital hours, but later expanded to include nights, weekends and holidays at the request of nurses who became accustomed to working with it during the day.

With the help of Dr. Smith and her team in San Francisco, and the support of Dr. Regina Godbout, the VISN 21 Chief of Staff, it has expanded to cover the entire network, which includes Nevada, northern and central California, and Hawaii.

“It’s a process that we’re improving all the time,” Smith noted. “When COVID started, that’s when the program transferred to the VISN. We started April 3 at the VISN level and were able to stand it up pretty fast because we already had it in San Francisco.”

Bartlett and Scilacci were two Veterans helped on the first night the program expanded beyond San Francisco.

On Saturday, June 13, the program marked its 1,000th encounter. Nearly one third of those were patients between the ages of 70 and 79. Thanks to this collaborative effort between providers, telephone advice nurses, and VISN 21 leadership, many Veterans have been able to take advantage of these services. This has improved access for Veterans with urgent care needs, while lessening the risk of COVID-19 infection by allowing them to get the care they need without ever leaving the comfort and safety of their own home. Through this program, VISN 21 will continue to serve Veterans using the VA Video Connect technology even after pandemic-related restrictions are ended.
return to top

Get help from Veterans Crisis Line

If you are in crisis or having thoughts of suicide, visit VeteransCrisisLine.net for more resources.